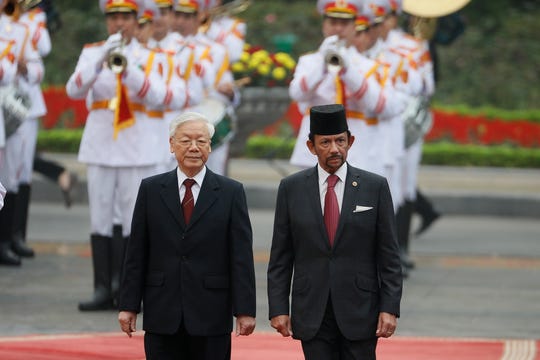 KUALA LUMPUR, Malaysia (AP) — Amnesty International on Wednesday slammed plans by Brunei to implement what the rights group called “vicious” Islamic criminal laws such as stoning to death for gay sex and amputation for theft.

Amnesty said in a statement that the new penalties, which also apply to children, are provided for in new sections under Brunei’s Sharia Penal Code and will come into effect April 3. The legal changes were announced in a discreet notice on the attorney general’s website, it said.

“To legalize such cruel and inhuman penalties is appalling of itself,” said Rachel Chhoa-Howard, Brunei researcher at Amnesty International. She said some of the potential offenses “should not even be deemed crimes at all, including consensual sex between adults of the same gender.”

“Brunei must immediately halt its plans to implement these vicious punishments and revise its penal code in compliance with its human rights obligations,” Chhoa-Howard said. “The international community must urgently condemn Brunei’s move to put these cruel penalties into practice.”

Brunei’s sultan instituted the Sharia Penal Code in 2014 to bolster the influence of Islam in the tiny, oil-rich monarchy, which has long been known for conservative policies such as banning the public sale of liquor. The first stage of the law included fines or jail for offenses such as pregnancy out of wedlock or failing to pray on Friday.

Amnesty labeled the Penal Code as a “deeply flawed piece of legislation” with a range of provisions that violate human rights.

There has been no vocal opposition to the law in Brunei, where Sultan Hassanal Bolkiah rules as head of state with full executive authority. Public criticism of his policies is extremely rare in Brunei.

The Sultan, who has reigned since 1967, has previously said the Shariah Penal Code should be regarded as a form of “special guidance” from God and would be “part of the great history” of Brunei. Under secular laws, Brunei already prescribes caning as a penalty for crimes including immigration offenses, for which convicts can be flogged with a rattan cane.

SEC, with coaching hires, could be tougher in basketball than football