It was supposed to be the first all-female spacewalk in history. Here’s why a man will take one of the spots instead.
USA Today

WILMINGTON, Del. – It was supposed to be the spacewalk-heard-round-the-world. And suddenly, it wasn’t.

NASA astronauts Anne McClain and Christina Koch were scheduled to be the members of the first all-female spacewalk. But on Monday, NASA announced male astronaut Nick Hague would join Koch on Friday instead because the spacesuit fit better.

The internet erupted with disappointment and criticism.

Yet Jinny Ferl of IFC Dover, the Delaware company that makes spacesuits for NASA, said this is not another instance of women being underrepresented in science. It’s a logistical issue.

There is a second size-medium suit, she said, but it needed to have the oxygen tank system attached to it and then be run through a series of tests before it could be safely used.

“I am the first to say that STEM is so important to get women into,” said Ferl, the design engineering manager. “I’m passionate about space exploration and women in that field.

“But in this case, I have to say, this is not an issue of discrimination or shortsightedness or a system that doesn’t represent women well.”

NASA officials said the reasoning behind the cancellation is that both women fit better in the medium-size spacesuit, but only one fully prepared spacesuit will be available for the spacewalk.

Spacewalks consist of astronauts working on the outside of the space station, conducting science experiments and testing out any new equipment. They can last five to eight hours.

Ferl said astronauts train extensively to figure out the fit that works best for them. Wearing an ill-fitting spacesuit is like “wearing a size of shoes that doesn’t fit you right” but on a much more dangerous scale.

In McClain’s case, she trained in both the medium and large size. But when she conducted a spacewalk last week, she found the medium size worked better, Ferl said. She didn’t want to attempt to do another spacewalk in the larger size.

Reconfiguring those spacesuits to have the life support equipment and other necessary materials work properly can take an entire crew day, Ferl said. It involves multiple tests to make sure everything is working correctly.

It’s easier and safer for NASA to switch astronauts than to reconfigure the spacesuits, she said.

Since the beginning of the Apollo program in the 1960s, ILC has designed and produced the spacesuit pressure garment for NASA astronauts. The company developed the “space suit assembly” that is part of the Extravehicular Mobility Unit, or the quintessential outfit most people imagine an astronaut wearing in space.

There are several parts of the space suit assembly, Ferl said, with the “cornerstone” being the hard upper torso or HUT. It’s like the shirt of the spacesuit.

The primary life support subsystem, which looks like a backpack, attaches to the hard upper torso – providing astronauts oxygen to breathe. 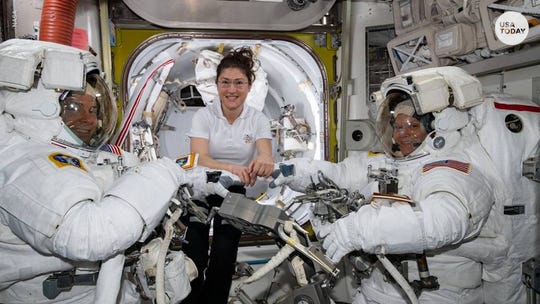 There are currently six spacesuits aboard the space station: two medium, two large and two extra-large hard upper torso, NASA officials said. But only one medium size torso will be available by Friday.

McClain tweeted Tuesday morning that the decision for her to sit this spacewalk out was based on her recommendation.

“Leaders must make tough calls, and I am fortunate to work with a team who trusts my judgement,” she wrote in the tweet. “We must never accept a risk that can instead be mitigated. Safety of the crew and execution of the mission come first.”

This decision was based on my recommendation. Leaders must make tough calls, and I am fortunate to work with a team who trusts my judgement. We must never accept a risk that can instead be mitigated. Safety of the crew and execution of the mission come first. https://t.co/VU9QNaHHlK

When the news broke about the spacesuits, some urged for more medium sizes to be made. Ferl said it’s not that simple.

The HUTs that are a part of these spacesuits were first made by ILC in the late 1990s. The company had no idea NASA would still be using them decades later, Ferl said. It has become a financial decision by NASA to keep using them.

The company no longer makes these HUTs because some of the materials used to build them are now considered to be antiquated, Ferl said. ILC regularly produces gloves, boots and leg pieces.

The company is working on a new hard upper torso piece called the Hybrid HUT. The hope is that this new piece will make it much easier to change sizes, ranging from small to extra large.

ILC is trying to get NASA to buy into the idea, Ferl said. They’ve performed demonstrations at NASA and have shown it to some crew members.

Ferl said this comes at a time when the government agency is looking to put “resources into vehicles that will put us back on the moon.”

“We’re hoping to convince them that this will solve some of their problems,” she said.