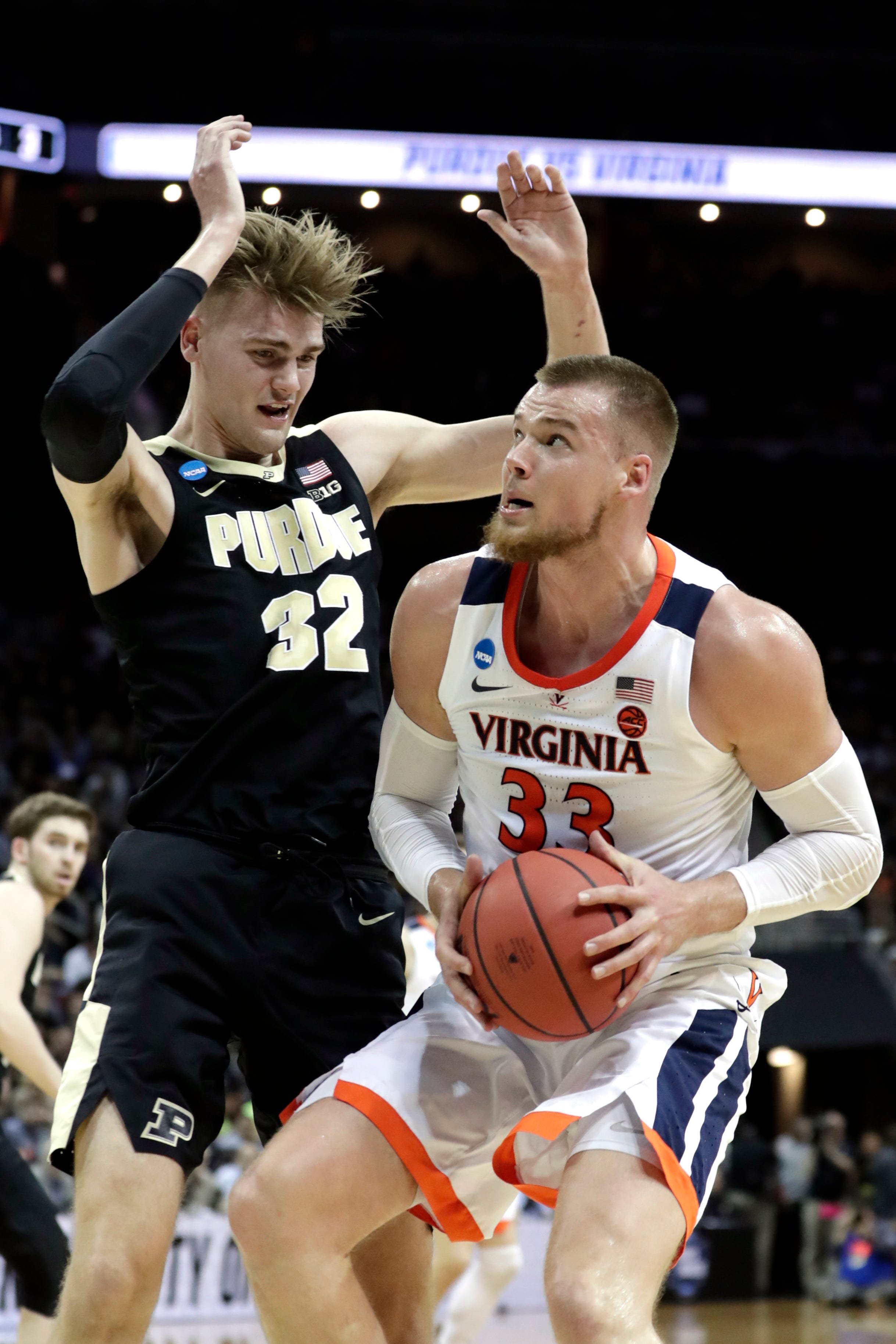 LOUISVILLE, Ky. (AP) — From embarrassment to exhilaration. From early exit to regional champ. From bracket busters to net cutters.

Virginia, the first No. 1 seed to lose to a 16 seed a year ago, survived overtime and Carson Edwards’ staggering 3-point show Saturday night to make it to the Final Four for the first time since 1984.

The top-seeded Cavaliers needed a last-ditch buzzer-beater to send the game in overtime, and then finally contained Edwards in the extra period to hang on for an 80-75 victory over Purdue in the South Region final.

The Cavaliers (33-3) redeemed themselves from last year’s loss to UMBC by relying on veterans, sound defense, poise, controlling the ball and a failure to be rattled even when the Boilermakers had the chance to ice the game in regulation at the foul line.

Their balance and experience allowed them to overcome a brilliant performance by Edwards, whose 10 3-pointers were one shy of the NCAA Tournament record. Edwards finished with 42 points for third-seeded Purdue (26-10) and none of his teammates scored more than seven each.

Edwards was named the Most Outstanding Player of the South regional, becoming the first player to win the honor from a losing team since Stephen Curry in 2008. Fitting, too, since Edwards scored the most points (139) through four NCAA Tournament game since 2000; Curry had the previous most with 128 points for Davidson.

Virginia got a last-gasp jumper from Mamadi Diakite’s as time expired to force overtime and the Cavaliers got clutch baskets from Ty Jerome and Hunter, who also had two free throws, before Guy and Clark sealed the victory.

Guy injured his ankle in the first half and his return was uncertain. But he came out from the break and hit back-to-back 3s and finished with 25 points — 21 after halftime — and 10 rebounds. Jerome had 24, Diakite 14 and Hunter 10 as the Cavaliers outlasted the high-scoring Boilermakers.

Edwards had been unstoppable until overtime, and although he connected on a jumper, he missed a late 3 and committed a turnover that ultimately led to Clark’s game-sealing foul shots.

The win put coach Tony Bennett in the Final Four for the first time in a decade with the Cavaliers. His father, Dick Bennett, coached Wisconsin to the Final Four in 2000 — beating Purdue in the regional finals.

Purdue: The Boilermakers looked like they would shoot Virginia out of the building and made clutch 3s. But they went cold for stretches and allowed the Cavaliers to get critical rebounds ending with an 18-10 advantage in second-chance points.

Virginia: The Cavaliers have finally shed the shadow of last year’s historic first-round exit and lived up to its No. 1 seeding. It wasn’t easy but they didn’t flinch as Edwards made 3s with regularity. Guy and Jerome took care of that with Guy making a gutsy recovery after going down in pain with the ankle injury late in the first half.

Virginia faces the Midwest Region winner at the Final Four next weekend in Minneapolis.