The crew on the Ethiopian Airlines plane that crashed in March performed all procedures recommended by manufacturer Boeing.
Buzz60

Boeing faced more scrutiny Thursday after a preliminary report indicated the crew of the Ethiopian Airlines jet that crashed last month, killing all 157 people aboard, performed all procedures recommended by the aerospace giant but failed to gain control of the doomed aircraft.

The report reveals details of the crew’s intense but ill-fated efforts to save the Boeing 737 Max from catastrophe.

“The crew performed all the procedures repeatedly provided by the manufacturer but were not able to control the aircraft,” Moges said at the news conference in the capital Addis Ababa.

Peter Goelz, former managing director of the National Transportation Safety Board, said the report thickens the cloud hanging over Boeing and the FAA since the tragedy, the second crash of a Boeing 737 Max in five months.

Boeing updated its instructions on handling such an emergency after a Lion Air crash in Indonesia in October that killed all 189 people aboard.

“The news is that the pilots followed the instructions from Boeing that were endorsed by the FAA and it didn’t save the plane,” Goelz told USA TODAY. “I don’t see these planes getting back in the air anytime soon.

The report recommends that the flight control system should be reviewed by Boeing and that aviation authorities should verify the system before the aircraft is released to operation, Moges said. 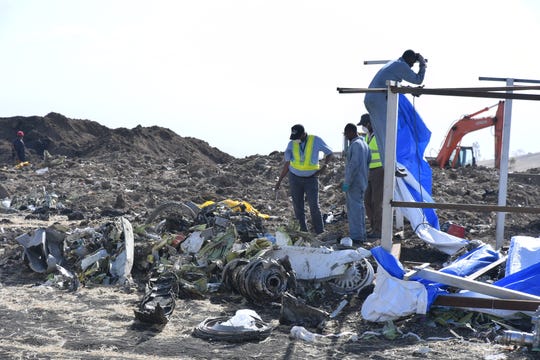 Rescue workers search the site for pieces of the wreckage of an Ethiopia Airlines Boeing 737 Max 8 aircraft near Bishoftu, Ethiopia, on March 13, 2019. (Photo: Stringer, EPA-EFE)

The report describes how the plane was less than two minutes into its flight from Addis Ababa on March 10 when one of the angles of attack sensors began providing faulty information, indicating an imminent stall. The pilots repeatedly tried without success to pull the jet’s nose, the report revealed.

“The captain called out three times “pull-up” and the first-officer acknowledged,” according to the report.

The pilots followed emergency procedures and turned off the system, the report says. The pilots tried to use the backup manual wheel, but the airplane was traveling too fast, according to the report. The jet crashed six minutes into takeoff.

The crash site was consistent with “high energy impact.”

“The aircraft impacted in a farm field and created a crater approximately 10 meters deep, with a hole of about 28 meters width and 40 meters length,” the report says. “Most of the wreckage was found buried in the ground.”

A final report on the crash could be a year away, Moges said.

Boeing said it is continuing to work on a software update for the MCAS system.  The FAA stressed in a statement that the report was preliminary and based on information “obtained during the early stages” of the investigation.

The FAA and U.S. National Transportation Safety Board remain involved in the probe, the statement said.

“We continue to work toward a full understanding of all aspects of this accident,” the FAA said. “As we learn more about the accident and findings become available, we will take appropriate action.”

Moges has previously said that preliminary data, obtained mostly from the plane’s voice and data recorders, indicated “clear similarities” between the Indonesian and Ethiopian crashes. At issue is the MCAS installed on 737 Max aircraft to help compensate for heavy engines placed more forward on the wings.

Ethiopian officials rejected media reports that a bird strike may have damaged an angle of attack sensor that apparently fed incorrect information to the plane’s MCAS.

In such an emergency, Boeing’s procedures instruct pilots to disconnect the MCAS system and continue flying manually for the rest of the flight.

In a statement Thursday, Ethiopian Airlines said the preliminary report “clearly showed” that the pilots of the flight “followed the Boeing recommended and FAA approved emergency procedures to handle the most difficult emergency situation created on the airplane.”

“Despite their hard work and full compliance with the emergency procedures, it was very unfortunate that they could not recover the airplane from the persistence of nose diving. As the investigation continues with more detailed analysis, as usual we will continue with our full cooperation with the investigation team,” the airline’s statement said.

Following the Ethiopian disaster, 737 Max jets have been grounded worldwide pending a software fix that Boeing is rolling out. The FAA said it expects to receive Boeing’s software improvement plan for the 737 Max aircraft in within weeks. The agency also promised rigorous review before approving installation of any proposed fixes.

Also at issue is thousands of the planes on order worldwide.

University of Richmond law professor Carl Tobias, an expert in product liability, says the report does not bode well for Boeing – at least in the short term.

“All of the planes could be grounded for a while and raises questions about the planes now on order and being built,” Tobias said. “These are mostly about economics, but the report may also implicate Boeing’s decisions in designing and certifying the plane and the FAA’s regulatory oversight.”

Amazon plans to launch over 3,000 satellites to offer broadband internet