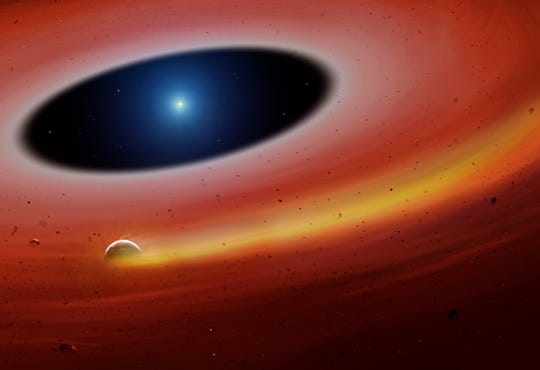 An artist’s conception of a planetary fragment in orbit around a distant white dwarf star. The fragment leaves a trail of gas in its wake. (Photo: University of Warwick/Mark Garlick)

Recently, while peering deep into outer space at a distant star, astronomers spied an orbiting fragment of a dead, shattered planet – one that could be a preview of Earth’s final fate.

In a new study released Thursday, scientists said they’d discovered one of the first small planet fragments in orbit around a dead white dwarf star, a finding “that sheds light into the twilight years of planetary systems,” the study said.

According to Space.com, that newfound planet chunk is likely part of a world destroyed during the star’s death throes. The chunk “may even be a piece of the shattered planet’s core.”

That any piece of a planet, however small, could survive so close to the incredibly strong gravity of a white dwarf is remarkable, the researchers said, according to Live Science.

The chunk orbits around the white dwarf every two hours, must be unusually dense and no larger than 250 miles in diameter to avoid being ripped apart by the star’s gravitational forces, according to the study.

Both the dead star and planet are within our own Milky Way galaxy, about 410 light years away from us.

Meanwhile, the fate of the star and its planet gives us a sobering picture of our solar system’s future, Science magazine said. “It is thought that when the sun swells into a red giant, it will consume Mercury, Venus, and Earth.

It will then shrink down to a dead white dwarf, similar to the one just discovered.

“Not a pretty thought, but we do have about 6 billion years to contemplate our fate,” Science reported.

What to know about increasingly popular cannabis-based products