Some were specific: Were Caloosahatchee blue crabs safe to eat? Was it dangerous to breathe near the algae-choked canals? How about swimming in the Gulf?

Others were systemic: Who posts warning signs? Was any agency monitoring illness reports? Would water and air be tested for toxins?

As red tide devastated wildlife in the Gulf of Mexico from Sarasota to the Ten Thousand Islands, a simultaneous outbreak of blue-green algae contaminated the Caloosahatchee watershed. Images of bloated dolphin carcasses and people jet-boating through algae blooms filled news reports. Social media seethed with rumors and petitions. Former Gov. Rick Scott declared two states of emergency – one for each bloom.

More: Rooney to CDC: Tell us what you know about how toxic algae blooms affect health

Yet through it all, the Florida Department of Health stayed largely in the background. It refused The News-Press’ interview requests and delayed responding or outright ignored emailed questions. To try to understand its internal workings, The News-Press obtained more than 2,500 emails from May 25 to Sept. 26. They reveal a hunkered-down agency scrambling to keep its message straight as the environmental calamity deepened.

Since then, the department hasn’t responded to a number of requests made over multiple weeks for an interview that might offer insight into the department’s stance throughout the crisis and its future goals. That invitation is still open.

The public records request sought correspondence from the two officials whose names appeared in the infrequent press releases the department issued about the situation: Kendra Goff, state toxicologist and chief of the Bureau of Environmental Health, and Andy Reich, scientific adviser for the bureau. Each of the 2,661 emails was reviewed by the department’s legal team and sensitive information redacted. What remains in the cache, which The News-Press is still analyzing, chronicles a range of concerns. When worried citizens, persistent reporters and other government entities turned to the agency for guidance, they often came away with more questions than answers. 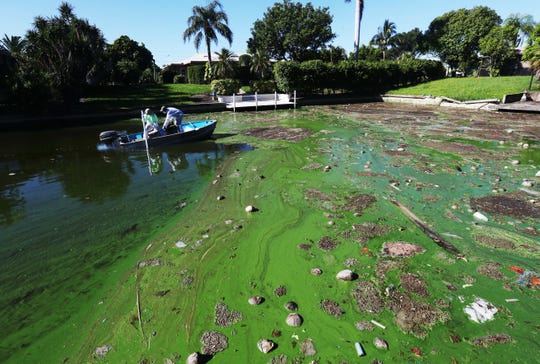 Gavin Lau and Joshua Davidson from Ecological Laboratories take a water sample from an algae infested canal near the Midpoint Bridge on Tuesday 9/28/2018. Cape Coral based Ecological Laboratories has a possible solution to the algae problem that is plaguing Cape Coral and Southwest Florida waters. They got a letter of no objection to start testing a section of this canal. They took water samples on Tuesday 9/28/2018. The process involves a denitrification process.  (Photo: Andrew West/The News-Press)

Ability, capacity and responsibility: Which agency does what?

Responsibilities and runarounds were common topics, even when officials from other agencies wrote the department. In August, for example, the Department of Environmental Protection’s John Calhoun asked about hot spot air testing: ”We are getting lots of calls from citizens requesting air testing around ponds with algae blooms. We usually refer to the County, who refer them to the local Health Dept, who refer them back to us and our Division of Air. Unfortunately, our Division of Air only does static monitoring of specific locations and doesn’t have the equipment to do local testing like that. Does DOH have any ability & capacity to do such localized air testing?”

Goff answered: “Unfortunately, we do not have any capabilities to perform air testing, localized or not. For more information on harmful algal blooms, people can be directed to our website. In general, we advise folks to take precautions around water bodies that may have harmful algal blooms. Happy to chat further.”

When the public emailed with questions, officials didn’t always answer. And when they did, some of their correspondents, like Ralph Quillen, found the exchanges frustrating.

Concerned for the health of his two young daughters, Quillen pressed Angela Smith, who administers Lee’s health department, to tell him whether the island was safe for his girls. She responded with generalities and gave him some informational links. They went back and forth a couple of times until Quillen had enough.

“Thank you for your response but you did not answer my question. Is it safe for my family to live in these conditions with these algae blooms and this red tide?” he wrote. “Why can’t I get a straight answer?”

After that, Smith didn’t write back. 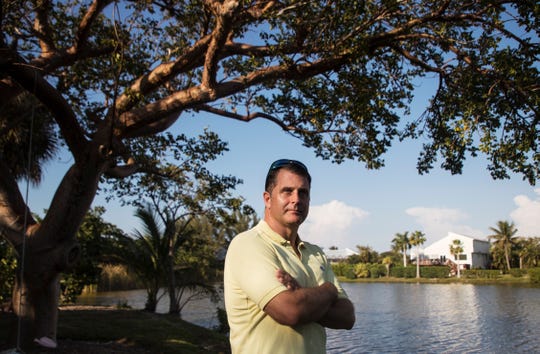 Sanibel Island resident Ralph Quillen stands for a portrait on Friday April, 5, 2019. He repeatedly contacted the Florida Department of Health during the red tide/cyanobacteria crisis and was not satisfied with the answers he got from them.  (Photo: Andrew West, The News-Press USA Today Network-Florida)

Dagmar and Steve Martin, who live on a dead-end Cape Coral canal contacted the department in July about the algae’s foul smell. “We are permanent residents and have no other place to stay. We don’t know how toxic the algae is … We are hoping to get help as soon as possible!”

The email wound up in Reich’s queue, but he did not write the Martins back.

Aug. 22, 2018, Pam Cox sent the department what she called a plea “to acknowledge the conditions with the Red Tide/Blue Green Algae crisis. Your website and silence on the current health situation is gross negligence … PLEASE, PLEASE, PLEASE … whoever is monitoring this mailbox, bring it forward to others in your office. Don’t just send an automated reply and delete it.”

Reich wrote back: “Dear Ms. Cox Thank you for your email to Florida Department of Health. The Department’s role in responding to red tide events relates to health concerns. You can find information on health effects of algal blooms on our website. Sincerely, Andrew Reich”

Aug. 17, JoEllyn Bavosa wrote asking “When will you help? When will you start testing? When will you issue warnings to the public about Cyanobacteria? This is not just Red Tide anymore and has not been for a very long time. With hope that your agency will step forward and help.”

Reich didn’t write Bavosa back, but he did send a colleague this: “There really is nothing we can say to address this email. Andy.”

► Reich’s response about whether freshly hunted alligator meat from an area of bloom is safe to eat: “It’s my best guess that the toxins would not accumulate in the muscle tissue but without data, there is no way of knowing for sure.”

► Goff telling epidemiology department chief, physician Russell Eggert, July 12, “We would like to discuss how we are going to handle these inquiries and we will need some help.  We are not used to this volume of inquiries.”

► Martin County environmentalist and former commissioner Maggy Hurchalla writing: “This is Florida’s Flint, Michigan – ignoring a problem because it is too scary and difficult to deal with.”

► And in one of Goff’s email threads, Martin County Commissioner Ed Fielding wrote presciently: “It portends to be a long, disastrous summer.”

Internally, officials repeatedly emphasized the need for a unified front.

In July, after then-Gov. Scott declared a state of emergency, Eggert, the epidemiology chief, asked Reich if the declaration should be discussed during a regular conference call with the epidemiology staff of the state’s county health departments.

“Yes,” answered Reich. “I think the issue of health impacts might become more important. Should (epidemiology and environmental health departments) discuss together to make sure we have a consistent approach? “

In August, Reich convened a phone conference with county health leaders and spokespeople statewide to “facilitate coordination and consistent messaging.”

Once warning signage became a source of concern, the department changed course. In June, it told a News-Press reporter that signs were not its responsibility. Then in August, it told the same reporter “We’ve posted hundreds of signs.”

The reporter responded: “Back in June, I started asking the local DOH about just that, and was told in no uncertain terms that posting blue-green algae warning signs is not the department’s role. Attached please find emails saying just that, and contradicting what you wrote. So, I’m not sure who’s mistaken here, but I’d like to know what the case is.”

Spokesman Brad Dalton later wrote back: “After speaking with the county office I believe the issue is that the work done in the community concerning signage was performed after the communication between you two.”

In their emails, department officials regularly discussed media coverage both local and national – from The Wall Street Journal to The New York Times, with Reich expressing relief that he hadn’t appeared in a Times story. “Glad my name didn’t show up,” he wrote a colleague.

They criticized some of the local stories. After a TV segment appeared, Goff wrote: “It is a shame that we can be misquoted so easily. No wonder we get the calls that we do from citizens confused on this topic. Angela, you and I have chatted about those challenges and sometimes backfiring with the media even if we are trying to provide the most accurate and current scientific information. Totally understand it’s sometimes beyond our control how the Department is quoted. I think we are only seeing the beginning of this if this article is any indication.”

Shortly after one of The News-Press’ stories about the department came out, one official included this comment with an online link: “FYI This article does not portray FL DOH in a positive light.”

Bloom season approaches: What’s been done; what’s left to do

As the next steamy summer season approaches, the potential for more outbreaks looms and it’s unclear how the department would handle another crisis.

A number of its key positions are vacant – a recently requested organizational chart shows no surgeon general, chief of staff or head of the legislative planning office.

Some of its approaches have changed since last year.

It’s rolled out an informational web page on cyanobacteria, it’s ramped up its outreach on aquatic toxins and it appears it’s now taking responsibility for posting warning signs.

Gov. Ron DeSantis has called for a harmful algal blooms task force and emphasized a science-based approach to fighting toxic algae outbreaks, but his office hasn’t answered calls or emails asking about the administration’s goals for the health department.

A patchwork of nonprofits, educational institutions and citizen initiatives are filling the leadership void. FGCU and Florida Atlantic University quickly received emergency funding to study the potential health effects of cyanobacteria. Lee Health began collecting data from its patients about exposure to blooms and symptoms. Several social media groups disseminate news and outbreak information. And Calusa Waterkeeper got a grant from the Southwest Florida Community Foundation specifically to do what the department hasn’t: engage with health care workers and decision-makers about cyanobacteria’s effects with a series of public events.