Thousands gathered inside an arena on the University of North Carolina at Charlotte campus on Wednesday to honor the victims of Tuesday’s shooting that killed two students and injured four others. (May 2)
AP, AP

Traffic stopped on Charlotte streets as the solemn procession rolled passed en route to his hometown in Waynesville, 150 miles west of Charlotte. Authorities say Howell, 21, tackled the gunman who opened fire in a classroom Tuesday. Howell and fellow student Ellis R. Parlier, 19, were killed; four other students were wounded.

Howell’s mother said Thursday that his family is “beyond proud” of her son’s actions.

“While kids were running one way, our son turned and ran toward the shooter,” Natalie Henry-Howell, Riley’s mother, told NBC’s “Today” show. “If he was in the room when something like that was happening, and he had turned away, he wouldn’t have been able to live with himself.” 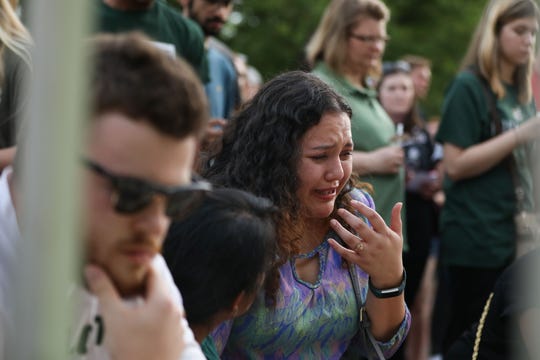 A student gets emotional as she comes to the steps of Kennedy Hall to lay a candle to honor the victims of a shooting the day earlier at the University of North Carolina Charlotte on May 1, 2019. (Photo: LOGAN CYRUS, AFP/Getty Images)

Teddy Howell, Riley Howell’s 14-year-old brother, agreed, saying there was no question that his brother would have done all he could to stop the killer.

“He put others before himself,” Teddy told “Today.” “He always has.”

No motive had been determined. Terrell told reporters after his arrest that he “just went into a classroom and shot the guys.” Terrell, who left the school in the fall, had no criminal record, authorities said.

Charlotte-Mecklenburg Police Department Chief Kerr Putney dubbed Riley a hero, saying targets in an attack must either run, hide and shield or take the fight to assailant. Putney declined to detail Howell’s actions but did say he “took the assailant off his feet.”

Response: Police stopped UNC Charlotte shooting quickly. But what about preventing it?

Lauren Westmoreland, Riley’s girlfriend, said she and Howell had discussed marriage. She said she was devastated by his death.

“Just tell people you love them,” she told “Today.” “The last thing that I got to say to him was that I loved him.”