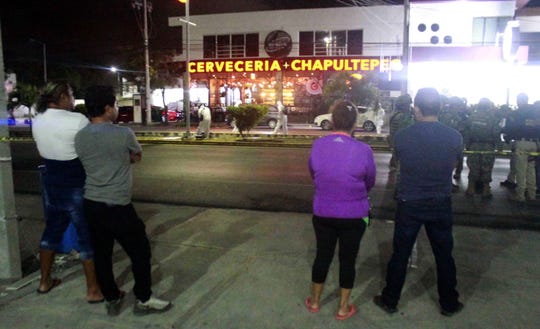 People observe the work of forensic experts at dawn in the area where an armed attack took place in a bar in the Mexican town of Playa del Carmen, Mexico, 14 May 2019. The attack, which occurred around 9:45 pm local time on Monday, left a preliminary death toll of one dead and 11 wounded, according to the Attorney General of Quintana Roo state. (Photo: Alonso Cupul, EPA-EFE)

MEXICO CITY – A pair of gunmen burst into a bar and opened fire with pistols, killing one person and wounding 11 others in the Mexican resort city of Playa del Carmen.

The bar attacked late Monday is relatively far from the beach and Playa del Carmen’s tourist zone. The state of Quintana Roo’s Tourism Promotion Council said Tuesday that none of the people shot were tourists. Its statement said initial reports suggested the attack stemmed from a dispute between criminal elements.

The council said the state’s leaders have been taking steps to keep popular tourist destinations safe through installation of surveillance cameras and modernizing the police force.

Impossible Foods, Beyond Meat and the growth of the meatless meat market