President Trump says the U.S. shot down an Iranian drone that was threatening the USS Boxer Naval ship in the Strait of Hormuz.
AP

Iran’s Islamic Revolutionary Guard Corps (IRGC) seized a British ship in the Strait of Hormuz, adding to escalating tensions between Tehran and the Trump administration.

President Donald Trump declined to say whether the moves by Iran crossed a “red line” or how the U.S. might respond. But he noted that the U.S. has a maritime security agreement with the United Kingdom.

“It goes to show you I was right about Iran,” Trump told reporters at the White House.

Last month, Trump abruptly canceled a planned retaliatory attack on Iran after the country downed an unmanned U.S. drone, but his administration has kept up a policy of trying to squeeze Iran’s leaders with stiff economic sanctions. Days after he pulled back the strikes on Iran, Trump threatened to use “overwhelming force” against Iran if it attacked any U.S. assets or personnel.

Iran announced this month it exceeded its limits set for nuclear enrichment set under a 2015 multilateral agreement that the U.S. withdrew from last year.

Tensions between Tehran and Washington had already flared this week amid a dispute over claims that the U.S. had shot down an Iranian drone, also in the strait. 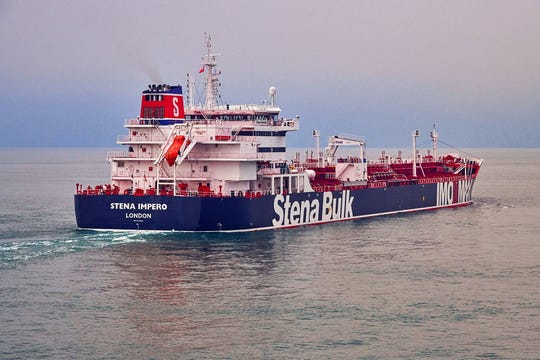 Hunt said his understanding was that there were no U.K. citizens on board the British ship. “Our Ambassador in Tehran is in contact with the Iranian Ministry of Foreign Affairs to resolve the situation and we are working closely with international partners,” he said.

Garrett Marquis, a spokesman for the White House National Security Council, said “this is the second time in just over a week the UK has been the target of escalatory violence by the Iranian regime. The US will continue to work with our allies and partners to defend our security and interests against Iran’s malign behavior.”

In a statement reported by FARS, the IRGC said its naval forces had seized the Stena Impero tanker and accused it of violating maritime rules and regulations in the Persian Gulf, FARS reported.

The IRGC said the ship had been escorted to the Iranian coastal waters in Hormuzgan province and that control was transferred to the Ports and Maritime Organization “for further legal procedures and investigations.”

Ayatollah Khamenei, Iran’s supreme leader, said in response, “[the British] commit crimes and make it appear legal,” and vowed that Iran would “respond in a proper opportunity and place.”

More: Iran says U.S. may have shot down its own drone by mistake

The company that owns the tanker said in a statement that the vessel, with 23 people aboard, was approached by “unidentified small crafts” and a helicopter in the Strait of Hormuz, Reuters reported.

“We are presently unable to contact the vessel which is now heading north towards Iran,” the company said.

It said there had been no reported injuries.

Regarding the drone incident, Trump said Friday there is “no doubt” that a U.S. warship destroyed an Iranian drone, despite Iranian denials that it lost an unmanned aircraft.

He said earlier that the USS Boxer took the action after an Iranian drone came within 1,000 yards of the warship and ignored multiple calls to stand down.

Neither Trump nor the Pentagon spelled out how the Boxer destroyed the drone or provided any video or other evidence from the incident. Several U.S. officials said the ship used electronic jamming to bring it down rather than hitting it with a missile. They spoke on condition of anonymity because they weren’t authorized to speak on the record about the event.

National security adviser John Bolton said, “there is no question this was an Iranian drone and USS Boxer took it out.”

An Iranian news agency reported Friday that the country’s armed forces say all Iranian drones in the Persian Gulf returned safely to their bases.

Iran said on Thursday that the IRGC seized a foreign oil tanker, the Panamanian-flagged tanker MT Riah. and its crew of 12 for smuggling fuel out of the country.

Ragu recall: Sauce recalled nationwide because it may contain plastic