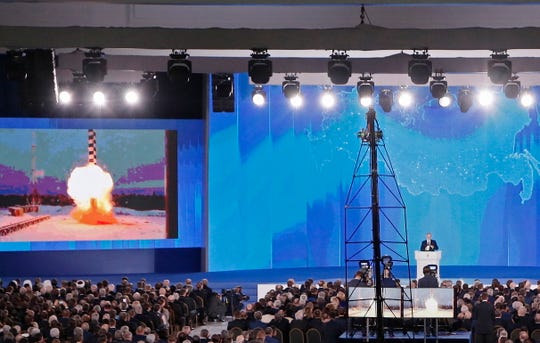 A mysterious explosion at an offshore Russian military site involving a nuclear power source for a missile is fueling international speculation as few details are available about what caused the blast and what its effects are.

Officials with Russia’s nuclear energy company Rosatom said five of its scientists were killed in an explosion Thursday during a test of “a nuclear isotope power source” for a rocket.

The accident occurred on a platform in the White Sea off Nyonoksa and caused a reported radiation spike in nearby Severodvinsk.

On Tuesday, Russian newswire Interfax and the Washington Post and CNN, citing other local Russian news outlets, reported that residents in Nyonoksa were being temporarily evacuated, but Russian officials cancelled the order hours later.

Here’s what we know now about the explosion:

An evacuation early Wednesday morning was ordered for the small town of Nyonoksa on the coast of the White Sea because of activities at the test site where the explosion occurred, Interfax news agency reported.

However, hours later, Russian officials backtracked on the order. Ksenia Yudina, a spokeswoman for the Severodvinsk regional administration, said planned military activities at the site were canceled and the town’s 500 residents did not have to leave.

Nyonoksa is about 30 miles from Severodvinsk, a city of 183,000, where the radiation spike was reported. Residents in Severodvinsk also received evacuation orders that were later canceled Tuesday.

At least five people were killed and others were injured in the blast, but an official death toll has not been confirmed as Russian officials have issued conflicting statements.

TASS: Radiation increased up to 16 times above normal levels

TASS reported that the city’s civil defense department head Valentin Magomedov said immediately after the blast that Severodvinsk saw radiation levels at 2 microsieverts per hour, which is about three times above normal levels.

Safe exposure is 0.6 microsieverts per hour, and a normal X-ray of someone’s digestive tract would be 3.3 millisieverts per examination, TASS reported.

Local officials in Severodvinsk said radiation levels normalized shortly after the blast occurred, and Russian officials were assuring residents that the region was safe.

President Donald Trump tweeted Monday evening that the “United States is learning much from the failed missile explosion in Russia.”

“We have similar, though more advanced, technology. The Russian ‘Skyfall’ explosion has people worried about the air around the facility, and far beyond. Not good!” Trump added.

The United States is learning much from the failed missile explosion in Russia. We have similar, though more advanced, technology. The Russian “Skyfall” explosion has people worried about the air around the facility, and far beyond. Not good!

Nuclear experts believe the accident occurred during a test of a missile that Russian President Vladamir Putin has touted in the past year, the New York Times and Reuters reported.

The SSC-X-9 Skyfall is a prototype cruise missile that could reach any corner of the world with a nuclear reactor as its power source, the Times reported.

Putin’s spokesperson Dmitry Peskov told reporters Tuesday that “security is fully ensured” in the region but didn’t comment on the missile that exploded, the Post reported.

Vyacheslav Solovyov, scientific director at the Russian Federal Nuclear Center, told a local newspaper that the institute was studying “small-scale” power sources that include “fissile materials,” the Times and Reuters reported.

Teens are being hospitalized for lung damage after vaping – "It's mind-boggling," doctor says

clashes between police and protesters