President Trump has announced that John Bolton is out as National Security Adviser. Trump used Twitter to announce the staff change.
USA TODAY

WASHINGTON – The political marriage between President Donald Trump and his hawkish national security adviser John Bolton was troubled from the start.

Trump sought negotiations with reviled despots. Bolton wanted the U.S. to topple them.

Their opposing views collided most recently over Afghanistan, spilling into public view over the weekend. Trump disclosed on Saturday that he had invited, and then uninvited, the Taliban – a militant Islamic group – to Camp David to seal a peace deal that would paved the way for a U.S. withdrawal from that 18-year war. Bolton argued that the Taliban could not be trusted.

Whether that rift was the last straw for Trump, or for Bolton, is not clear. That was just one of oh-so-many matters on which they disagreed.

“You can only say ‘no, no, no’ to a president so many times,” said Aaron David Miller, who served as a top State Department negotiator for past presidents of both parties and is now a senior fellow at the Carnegie Endowment for International Peace. “North Korea, Iran, Venezuela and – the last straw – Afghanistan … They were out of sync both personally and on policy.” 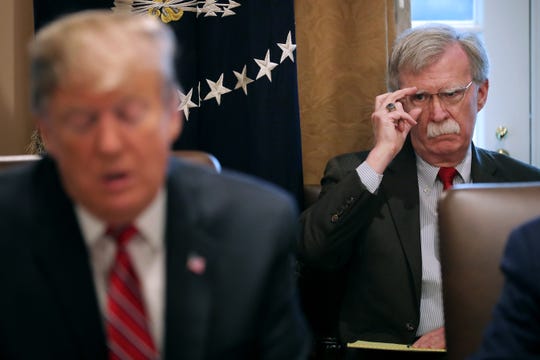 Take North Korea, for starters. Trump relished showy summits with Kim Jong Un, the country’s ruthless leader. Bolton was skeptical that such talks would amount to anything.

More: ‘Bolton contradicts Trump on whether he was fired

That was on display during the last Trump-Kim summit in Hanoi, where North Korean officials offered to partially dismantle their country’s primary nuclear facility. Bolton, among others, successfully pressed Trump to reject the deal and demand full denuclearlization. The talks collapsed and both leaders went home empty-handed.

In the months since those negotiations stalled, North Korea has repeatedly tested short-range missiles – a provocation that Bolton has highlighted and Trump has downplayed.

Trump’s approach is to “stiff arm” his counterpart with one hand and offer an olive branch with the other, said James Carafano, a national security and foreign policy expert with the conservative Heritage Foundation. Bolton’s approach, he said, is to negotiate only an opponent’s surrender.

Carafano argued that despite those tactical differences, Trump and Bolton agreed on a broad swath of issues. They both strongly supported Brexit, the United Kingdom’s efforts to leave the European Union. They shared a distaste for the United Nations and agreed on the U.S. withdrawal from the Iran nuclear deal, a landmark U.S.-Russia arms control treaty and other several other multilateral pacts.

More: Here’s what you missed about Brexit in the U.K. last week

But Bolton wanted to aggressively confront Iran, particularly after its military shot down a U.S. drone earlier this summer. He sought military options for ousting Venezuelan President Nicolas Maduro. He opposed Trump’s plans to withdraw U.S. forces from Syria and Afghanistan.

More: Iran reduces nuclear deal compliance, warns ‘not much time left’ to save accord

Trump viewed Bolton as a warmonger, and some of the president’s allies feared the hardline national security adviser was pulling him deeper into military conflicts, particularly in the Middle East.

“It seems clear that Bolton and Trump did not share anything close to a similar view of global affairs,” said Harry J. Kazianis, senior director of the Center for the National Interest, which advocates for “strategic realism” in U.S. foreign policy. “Trump is now free to find a national security adviser who is against wars of regime change, a smaller footprint in the Middle East, some sort of diplomatic track with North Korea and a much bigger focus on the rise of China.”

Danielle Pletka said Iran may have been the most contentious foreign policy clash between Bolton and Trump.

Trump has embraced a “maximum pressure” campaign aimed at isolating Iran economically and politically. But at the same time, the president has repeatedly said he would meet with Iranian President Hassan Rouhani with no preconditions.

Such a session would likely make Bolton’s blood boil, said Pletka, senior vice president of foreign and defense policy studies at the American Enterprise Institute, a think tank where Bolton served as a senior fellow before joining the Trump administration.

“He doesn’t believe in the power of talk, except on truly rare occasions,” Pletka said. “He’s very, very hawkish.”

It’s perhaps fitting that Trump and Bolton even clashed on Tuesday as their inevitable divorce became official. Trump said he had fired Bolton, while Bolton said he resigned.