“U.S. & its clients are stuck in Yemen because of illusion that weapon superiority will lead to military victory,” Zarif tweeted. “Blaming Iran won’t end disaster. Accepting our … proposal to end war & begin talks may.”

Pompeo said the Iranian government was behind nearly 100 attacks on Saudi Arabia while Iranian President Hassan Rouhani and Zarif “pretend” to engage in diplomacy. 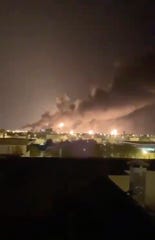 “Amid all the calls for de-escalation, Iran has now launched an unprecedented attack on the world’s energy supply,” Pompeo said. “We call on all nations to publicly and unequivocally condemn Iran’s attacks.”

Muhammad al-Bukhaiti, a Houthi rebel leader, told The Associated Press the U.S. claims that Iran was behind the attack reflected “political bankruptcy” of the Trump administration. He said the rebels were able to exploit “vulnerabilities” in Saudi air defense systems.

“We have been constantly preparing ourselves for a full-fledged war,” Hajizadeh said.

The oil attacks resulted in a temporary suspension of production at Abqaiq and Khurais plants, Saudi Energy Minister Prince Abdulaziz bin Salman said in a statement carried by Saudi Press Agency. It led to the interruption of about half the kingdom’s total production, he said. That is about 5% of the world’s daily oil production.

Aramco CEO Amin Nasser said no one was injured in the attacks. He said work was under way to restore production and a progress update would be provided in the next two days.