At least 11 wild elephants have died after plunging from a waterfall in a national park in Thailand, wildlife officials said Tuesday.

The animals were found at Haew Narok – Ravine of Hell – waterfall in Khao Yai National Park.

Park officials said five adults elephants and a calf were found at the waterfall Saturday. Officials believe that the baby elephant had drowned and the five adults, found in a ravine below the baby, fell trying to reach it. 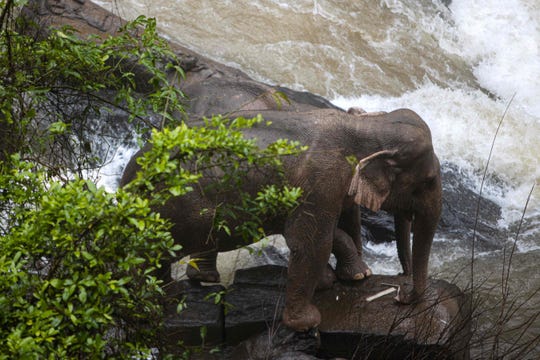 This photo by Thai News Pix taken on October 5, 2019 shows two elephants (one behind the other) trapped on a small cliff at a waterfall at Khao Yai National Park in central Thailand as rescuers work to save them. (Photo: PANUPONG CHANGCHAI, THAI NEWS PIX/AFP via Getty Imag)

The five additional elephants confirmed Tuesday were from the same herd, and only two elephants from the herd have survived the incident, said Nattapong Sirichanam, governor of Nakhon Nayok province, according to Reuters.

The two surviving elephants had been trapped on a cliff above the baby elephant, park officials said.

A similar incident killed eight elephants at the same waterfall in 1992, and Sompote said the eleventh death is the highest number of elephants to die in a single incident in Khao Yai.

According to Reuters, only about 3,500 to 3,700 wild elephants remain in Thailand. The park is home to an estimated 300 elephants, the news agency reported.

Asian elephants are classified as endangered by the International Union for the Conservation of Nature.

The surviving elephants will likely experience grief. When two elephants died earlier this year at an Indianapolis Zoo, officials confirmed that the rest of the herd reacted emotionally.

“This is probably just as difficult for our elephants. We know that elephants grieve. They are intensely social,” Indianapolis Zoo President Rob Shumaker said at the time.

As Donald Trump defends move, who are the Kurds?