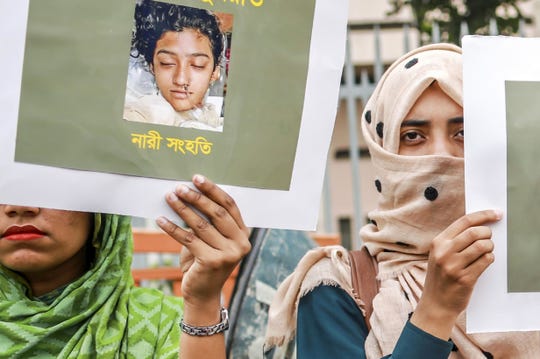 In this file photo taken on April 12, 2019 women hold placards with a photograph of schoolgirl Nusrat Jahan Rafi at a protest in Dhaka, following her murder by being set on fire after she had reported a sexual assault. (Photo: SAZZAD HOSSAIN, AFP via Getty Images)

Following a wave of protests throughout Bangladesh, 16 people have been sentenced to death in the murder of a teenage girl who refused to drop sexual harassment charges against her principal.

On April 6, Nusrat Jahan Rafi, 19, was lured to the roof of her school in the town of Feni, where she was asked to renege the sexual harassment charges by a group of five people wearing burqas.

She refused. Her hands were then tied, before they doused her in kerosene and set her on fire. She was taken to the hospital, where she died four days later after 80% of her body was covered in burns. A video was recorded in the ambulance ride that showed Rafi’s testimony.

Rafi initially filed a complaint with police alleging that the principal had called her into his office and repeatedly touched her inappropriately. His arrest was met with anger by his supporters, many of whom were local politicians.

Police said that the attack took place during the daytime, so it could be staged as a suicide attempt.

Massive protests followed her death throughout Bangladesh, and tens of thousands of people attended her funeral procession in Feni. Bangladeshi Prime Minister Sheikh Hasina promised that the individuals who committed the murder would be punished.

Judge Mamunur Rashid found Principal Siraj Ud Doula and 15 others — which, according to BuzzFeed News, include two teachers, Rafi’s classmates, and politicians — guilty Thursday of either killing Rafi or ordering her murder.

Their defense lawyer, Giasuddin Nannu, said all 16 individuals will appeal the verdict.