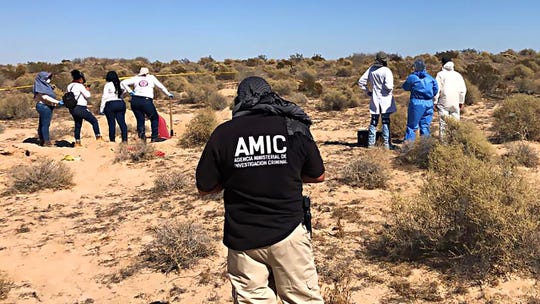 Women with the Mexican group Searching Mothers of Sonora, joined by state investigators, dig up a mass grave with the remains of 13 people on Oct. 24, 2019, outside the popular beach town of Rocky Point. (Photo: Courtesy of Sonora Attorney General’s Office)

TUCSON, Ariz. – A group of Mexican mothers searching for missing loved ones uncovered a mass grave with the remains of at least 27 people buried near the popular Mexican beach resort town of Puerto Peñasco, commonly known in Arizona as Rocky Point.

The number of bodies recovered from the mass grave could rise once again Saturday as searchers continue digging up and investigating the area, according to Sonora state officials.

The women, part of the group Madres Buscadoras de Sonora, or Searching Mothers of Sonora, located the grave on Thursday along a state highway east of Puerto Peñasco, according to information from Sonora’s Attorney General’s Office.

Staff members from the office, as well as forensic workers from the state’s criminal investigations unit, joined the mothers in their search. They will help transport the bodies to a lab and work to identify the remains.

Inside the mass grave, the women found 13 bodies on Thursday, fully clothed. On Friday, they found an additional 14 bodies, according to state officials. The search will resume on Saturday, meaning the tally could rise once more.

The identities of the dead are not yet known, and it’s unclear how long the remains had been buried.

Lupita Orduño, spokeswoman for the state’s Attorney General’s Office, said it was too early to come up with theories on why the bodies were buried in a mass grave because they first had to determine how they died or were killed.

“We’re just now trying to identify the cause of death,” she said. “We don’t know how they were killed. And that’s what the forensic lab will do.”

The group has not responded to requests for comment on the discovery. But a post on their Facebook page from Wednesday alluded to the discovery of the mass grave in Rocky Point on that day.

A second post from Thursday showed pictures of the women and forensic workers digging up the grave in the middle of a remote desert area, surrounded by Mexican Federal Police officers and National Guard troops.

The Searching Mothers of Sonora describe themselves as “mothers searching for missing persons or human remains, to bring peace to other families that are going through the same pain,” according to their Facebook page.

“We are not looking for the perpetrators, we just want back what was taken from us one day,” their description said.

The Attorney General’s Office encouraged the relatives of missing loved ones in the area to file missing person reports and submit their DNA to a national database so they can better identify the remains found. 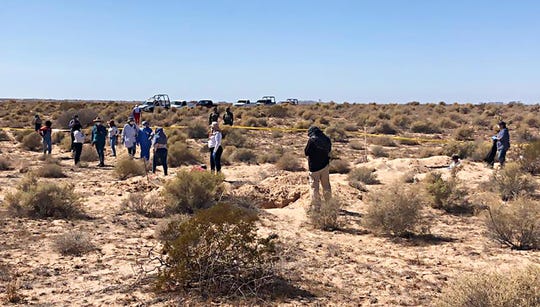 A group of women and Sonora investigators dig up a mass grave with 13 bodies near Rocky Point on Oct. 24, 2019, as federal police and National Guard soldiers look on. (Photo: Courtesy of Sonora Attorney General’s Office)

Forensic workers will remain in Puerto Peñasco to help collect samples from relatives, setting up hours on Saturday for that task.

“We will continue working, shoulder to shoulder, with the searching mothers of Puerto Peñasco. Their pain makes them strong, and supporting their brave labor is an act of justice that we directly assume at the Attorney General’s Office of Sonora and the National Search Commission,” said Claudia Indira Contreras Córdova, the attorney general for Sonora.

Puerto Peñasco, located about a three-hour drive southwest of Phoenix, has been a relatively safe haven in the past few years, in an area that is otherwise known as a busy, and very profitable, drug and human smuggling route into Arizona.

But there has been an occasional cartel-related gunfight over the years. The city was the scene of especially heavy fighting among criminal groups and the Mexican military in the early 2010s.

Recently, the Sonoran state government, with the help of Arizona officials, has invested greatly in improving safety in and around the beach resort town, as well as the main highway from Arizona leading to the city.

The city is a key source of tourism revenue for the state, but an increasing number of visitors come from Arizona, making it a priority for both states.